Pincushion Hill Montessori School has grown into a rich and full community during its 60 year history; a history that began long before the school came into existence. The original building that would later house part of Pincushion Hill Montessori School can be seen in the 1854 map of Ashland. At that time it was owned by farmer Seneca and Martha Greenwood, and their five children. It later was sold to Ralph and Monica Bell and their eight children, and then to Ernest and Cecile Zaik and their four children.

It was when Cecile Zaik was looking for alternative schooling for her four children that she came across the name of Dr. Maria Montessori. After in-depth research, she decided that Dr. Montessori’s teaching methods would best allow her children to develop their potential. Since there were no local training centers for learning how to teach in this unique method, she was compelled to import a Montessori trainer and teacher, Mrs. Maria Perzada (doctor Montessori’s god-child) from India. This wonderful lady who was trained by Dr. Maria Montessori herself, came to live with the Zaiks and trained Cecile one-on-one for almost two years. Cecile Zaik was now ready to outfit the classroom for her children. Cecile’s oldest daughter Christine has fond memories of waiting at the Boston pier with her family for the container ship from Holland to arrive with those mysterious and almost magical Montessori materials. Opening the boxes was like Christmas in mid-summer. Soon the school shelves were filled with the necessary teaching materials and her children’s education began. It didn’t take long for the neighbors to become curious about this “new method” of teaching being utilized in the little farmhouse on the hill. After their many inquiries and some small compensation for her services, the single classroom was soon full to capacity. As word spread about the success of the Montessori method of teaching, more and more families enrolled their children in the program. Eventually, the entire downstairs of the family’s home was devoted to teaching children using the Montessori method; this was 1962.

As the years passed and the school continued to grow, the founder’s family had to relocate to a nearby cape house since the entire family home was being used as classrooms. After four years, several of the enrolled children had reached elementary age, so Cecile began an elementary program in addition to the already successful Children’s House program. The transformation to a bona fide school was underway. Cecile Zaik’s daughter Christine had finished college with degrees in Early Childhood education with a triple minor in Elementary education, art history, and nursing. It wasn’t long before Christine decided to pursue her Montessori training and join the school. Again, Montessori training was difficult to find. It was either sheer good luck or fate that nearby Boston College was hosting a Montessori training center. In 1979, the newly wed Christine Kovago completed her rigorous training under the tutelage of Martha Monahan, Sister Anntonitta, Judi Zalles, Anne Neubert and Bonnie LaMothe; now legendary names in Montessori circles. This signaled a new era in the development of Pincushion Hill Montessori School. Christine brought her energy and enthusiasm to the school and it ensured the success of the future. In those days, the budget didn’t allow for much staffing and other expenditures such as cleaning services, so the burden of labor fell mostly on the less senior teacher, named Christine. Those “learn by doing” years passed quickly and it wasn’t long before Christine Kovago was running virtually every facet of the school.

During this time Cecile Zaik undertook additional elementary Montessori training in Washington DC and she returned to Pincushion. In the early 1990’s the school had reached an important juncture. Would Pincushion Hill grow to meet the needs of families in the future or would it remain the “schoolhouse in the neighborhood?” Christine Kovago took action and along with the other members of the non-profit corporate board (instituted in 1989) the decision to meet the challenges of the future was made. The late founder, Cecile Zaik, retired from the school in 1994 and Christine was appointed president of the corporation. She decided she needed assistance with the business end of the operation. Christine convinced her husband of twenty years to come on board in the capacity of Business Manager. With his formal business training and twenty years experience running his own business he was the perfect complement to Christine’s passion for Montessori education. The leadership of the school was in new, but experienced and capable hands. Christine and Gus immediately made their vision for the future a reality by rebuilding the infrastructure, improving the staff qualifications and reshaping the already strong curriculum. In the past, economic restrictions made it difficult to always hire fully trained Montessori staff but Christine and Gus’s commitment to doing so was firm. Now we boast a majority of fully trained Montessori teachers in addition to both BA and MA degreed professionals. Specialists, highly trained in their field of expertise, were added to the faculty to teach the subjects of Art, Music, Physical Education, Library Studies, Natural Sciences, Mindfulness/Yoga, Snapology (STEAM) and Spanish. The curriculum had been historically strong at Pincushion, but with consultations from teachers, administrators and other educators, a formal curriculum was developed. It was truly a huge undertaking but one that Christine knew would improve the education at the school. This curriculum outline is presented to all parents at the beginning of each school year with on-going modifications and improvements being made as needed to maintain a curriculum that is challenging, forward-looking and still true to its Montessori roots.

While the “old farmhouse” always bore a quaint charm, the quarters were often cramped. In the summer of 1995 the first of thirteen remodels of the building was begun. Some of the many improvements included adding a large welcoming foyer, two office areas, many spacious classrooms, redesigning of existing spaces to optimize the learning environment, further expansion of the outdoor teacher-children gardens as part of the curriculum, and driveway restructuring and playground remodeling. These combined projects have brought Pincushion Hill Montessori School much closer to being the modern, dynamic campus that Christine always envisioned. Pincushion Hill has always believed in the building of community spirit. We offer informational seminars, forums and open houses to support our Pincushion community. We currently have an enrollment of 50-75 students, ranging in age from 2.9-12 years. Our student body represents many different countries and ethnic groups. As demonstrated by our illustrious past and stable present, Pincushion Hill Montessori School is looking forward to meeting the challenges of the future with leadership, excitement and commitment to exceed the high expectations that we have always upheld.

The Pincushion Hill Montessori School is deeply committed to laying the foundation upon which each child can build a lasting and memorable educational experience. We foster competent, responsible, adaptive citizens who are lifelong learners and problem solvers.

Formal education occurs in a structured environment whose explicit purpose is teaching students. Education is the process of facilitating learning, or the acquisition of knowledge, skills, values, beliefs, and habits. Educational methods include storytelling, discussion, teaching, training, and directed research. 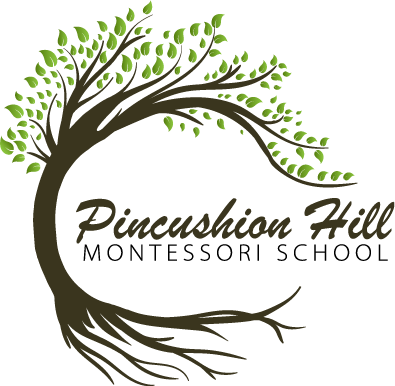